by Jason Okundaye (a London-based writer, and columnist at Tribune Magazine)

We know about the laws and riots. What about the spaces and intimate relationships communities carved out to survive? 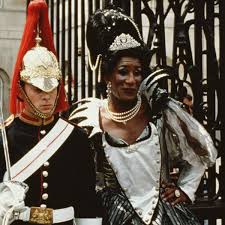 ‘My vision of Black British queer history isn’t one that follows the template of how Black history is currently taught.’ A drag queen with a member of the Household Cavalry at Buckingham Palace in 1995.Photograph: Steve Eason / Getty Images

I’ve long respected the principle that, as a Black gay man in Britain, I owe the relative security and increasingly more tolerable environment that I enjoy to those who came before me. It’s just over 20 years ago that the footballer Justin Fashanu – who endured media storms and intrusions into his private life – killed himself. Now, the kind of explicitly homophobic and racist media vilification that Justin faced is unthinkable – even if, of course, homophobic and racist media still persist.

The idea of the past as host to revolutionary struggles that mapped out a better world for Black Britons is at the core of Black History Month, as well as major cultural events such as Notting Hill carnival. An American import, Black History Month was first celebrated in the UK in October 1987 thanks to the work of Akyaaba Addai-Sebo, who had been a special projects officer at the Greater London Council. In more recent years, Black Britons have accelerated our criticism of the outsized role the US plays in Britain’s Black History Month, with author Yomi Adegoke writing in 2017 that “calls for a British focus during October’s celebration are not new, but they are now louder than ever”.

But as a writer and researcher who focuses on Black British gay men, it sometimes feels as if this re-centring of Black Britishness doesn’t extend to my queer British forefathers. Instead, people and institutions tend to focus most on African American queer figures such as Marsha P Johnson, Stormé DeLarverie, or Bayard Rustin. There are multiple reasons for this. Particularly among white queer people, and usually in Pride month, conjuring received wisdom from African American queer figures, such as the often repeated but false statement “Don’t forget, Marsha P Johnson threw the first brick at Stonewall,” is a method for superficially engaging with Black queerness. The focus on singular and mythical brick-throwing moments allows Black queer figures to be presented as sacrificial lambs fighting in service of a broader queer movement, rather than people operating with the primary goals of self-organisation and self-preservation. Of course, the organising of Black queer and trans people such as Marsha should be honoured and taught, but it doesn’t hold much relevance to Black British queer history.

Another reason why these histories don’t tend to receive much coverage or specific engagement is because the story of Black Britain is often framed by legislation and policy changes, such as the first Race Relations Act in 1965, or moments of high drama, such as the 1981 Brixton riots. But what about the spaces, networks and intimate relationships that Black queer communities carved out for survival? As I set out to learn about the histories of Black British gay men, I discovered there’s been no legislation to reference and little by way of publicly recorded events to retrace. So, the best way forward has been to engage with a history from below, drawing on the knowledge of intimate networks.

In Brixton, queer and trans Black British people found refuge in the late 1970s in a shebeen, an illegal bar, on Railton Road, which provided a space for socialising and cruising. Today, Railton Road and neighbouring Mayall Road are home to some of the most formidable Black British gay activists – whose organising around the Aids crisis, media homophobia and Section 28, among other issues, is too little known.

I only became aware of this rich community when I met one of my queer elders, Marc Thompson, whom I will call Uncle Marc because that is, of course, the respect he deserves. Uncle Marc, co-founder of PrEPster, an HIV prevention service, helped me with my undergraduate research on disparate HIV rates among Black British men who have sex with men. Since speaking with him and learning of his organising from the early days of the Aids crisis up until now, I’ve become aware of a wealth of Black British queer history that is under-studied and under-explored. There is much left to uncover – I want to learn, for example, about the short life of the Black Lesbian and Gay Centre in south London – how it came into being, and what Section 28 meant for its dependence on local government funding.

And what of the Black Pervert’s Network, a community safe space for experimental sex and play, run by Black queer artist Ajamu X? How did community safe spaces allow friendships and romances to flourish in an environment that was often hostile to Black queer life? As for Justin Fashanu, what’s often omitted from his story is the long, intensive campaigning and organising that Black queer activists engaged in to oppose the homophobic coverage of his coming out, while challenging the homophobia that plagued Black British media.

Uncovering the social histories of Black queer people requires going out and speaking with the community of elders who have lived, fought and loved through it. This is something I would task all Black people with – because understanding the intimate histories of our communities often relies on old-fashioned conversation and social knowledge, rather than on big policy changes or even what may be considered key moments in the history of race relations. After all, I wouldn’t define my own short personal history as a Black gay man by the passing of the 2010 Equality Act; I would define it through my networks, organising, friendships, romances and community. My vision of Black British queer history isn’t one that follows the template of how Black history is currently taught; it’s one I’m learning through coffees and Zoom calls with the giants whose shoulders I stand on.

Recently, Avanti West Coast gave the world a glimpse of how they’re planning to Live Proud, including a train dressed head to toe in Pride colours. But, alas! It needed a name.

That’s why they asked us to find us a fitting title that would capture the heart and soul of Pride – what’s been achieved so far and how it can continue to make a difference long into the future. After receiving over 1500 amazing names and supporting stories, they’re delighted to have discovered a worthy winner.

The new name for this very special train is Progress. 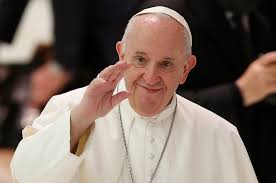 Pope Francis endorsed same-sex civil unions for the first time as pope while being interviewed for the feature-length documentary “Francesco,” which had its premiere at the Rome Film Festival last Wednesday.

“Homosexual people have the right to be in a family. They are children of God,” Francis said in one of his sit-down interviews for the film. “What we have to have is a civil union law; that way they are legally covered.”