Out in the city is a project (supported by Age UK Manchester) to support members of the lesbian, gay, bisexual and transgender communities who are over 50 years of age.

Out in the City is a friendly social / support group which meets every Wednesday from 1.00pm to 3.00pm at Church House, 90 Deansgate, Manchester M3 2GP.

If there is no security guard to let you in, press 8 on the new intercom system. Then the arrow at the bottom left. Reception will open the door. Take the lift to the third floor.

Every Thursday there are different activities such as day trips, visits to galleries, museums, cinemas, pubs, tea rooms as well as walks in the city and in green spaces.

A plaque was unveiled at Church House on 7 October 2014 to mark the 50th anniversary of a meeting held in the offices of the Diocese of Manchester which began the modern equality movement for lesbian, gay, bisexual and transgender people. 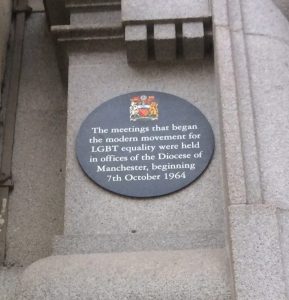 The first meeting of the North West Committee for Homosexual Law reform took place in the Manchester Diocesan Board for Social Responsibility on Blackfriars Road in the then Bishop of Middleton’s Room.

In 1964 Allan Horsfall, a gay rights campaigner from Lancashire, became one of the founder members of the North West Committee for Homosexual Law reform (NWCHLr), which became the Campaign for Homosexual Equality.

The Sexual Offences Act of 1967 partially decriminalised sex between men aged 21 and over in England and Wales. It was the first step in an ongoing struggle against discrimination against the LGBT community.

Having achieved the first aim of legal reform in 1967, the focus of NWCHLr changed. One of the main concerns was the gay community’s isolation due to lack of safe public areas.

Twenty years after the landmark Sexual Offences Act, a new law known as Section 28 banned local authorities from promoting homosexuality or educating people about its acceptability. It was named after a controversial clause of the Local Government Act 1986.

A huge rally against Section 28 organised by the NW Campaign for Lesbian & Gay Equality was attended by more than 20,000 people in Manchester in February 1988. Section 28 caused real problems for people in their workplaces and schools due to self censorship. The law was finally repealed in 2003.