After dining at the Moon Under Water, we took the short walk along Deansgate to the John Rylands Library. 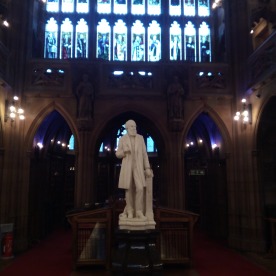 Although the Library was named after a man, it was founded by a woman. Enriqueta Rylands opened her Library in 1900 as a gift to the people of Manchester 18 years before some women achieved the freedom to vote. Its collections contain previously unheard stories of women from around the world.

The current exhibition is “The Women Who Shaped Manchester”. The gallery showcases a variety of items from poems, letters and books to handwritten manuscripts. Together they tell remarkable stories of how women have been perceived and sought to challenge the status quo.

Too little ink has been spilled telling the stories of exceptional women from Manchester’s past – from the mill workers to the protesters who galvanised the streets. We delved into the sepia-tinted days of 19th and 20th century Manchester seeing the city through the words and actions of extraordinary women. We were amazed by their feats as they paved new paths with their dedication and determination.

Unfortunately, we were not allowed to photograph the exhibits as some were sensitive to light. One extraordinary letter was from Winston Churchill where he was clearly worried that women would disrupt a meeting at the Free Trade Hall. He wanted the women to sign an agreement confirming best behaviour or be excluded from the building!

We read Emmeline Pankhurst’s stirring letter that speaks for those prepared to make the ultimate sacrifice in the name of equality. The exhibition captures the passion and strength of these pioneers, and we were inspired by the Women Who Shaped Manchester. 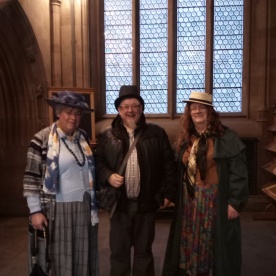 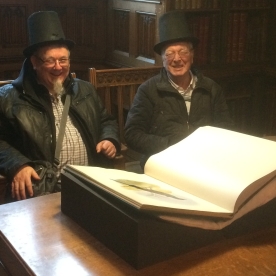 We had another opportunity to dress up. I’m thinking of changing the name of the group from “Out In The City” to “Hat In The City”.

We also looked at the reading room and historic toilets in the basement before retiring to the café for refreshments and cakes.

One thought on “John Rylands Library”