We were heading to the Odeon cinema to see “Bohemian Rhapsody”,  the story of the life of Freddie Mercury (lead singer of pop combo Queen), but we stopped off at one of the oldest pubs in Manchester.

The Briton’s Protection has stood proudly on the corner of Lower Mosley  Street and Great Bridgewater Street since 1811 and is famed for its enormous whisky collection. The pub grub was also pretty good and was washed down with a pint of Yakima Gold – they also house an extensive range of real ales. 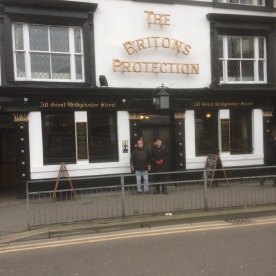 This is a conversation pub – there is no “background” music – and we reminisced about pubs with flagged flooring, spittoons and sawdust. We debated the big issues in life like why there was no apostrophe in the pub sign – “Britons Protection” – and we resolved to correct this iniquity.

In the corridor leading to the larger rooms at the back of the pub, there is a mural of the Peterloo Massacre. This is the only place in Manchester to commemorate the 1819 protest for parliamentary reform, in which 15 demonstrators were killed and 700 more injured by the sabre-wielding cavalry who charged the 80,000 strong crowd.

It’s not hard to see why The Briton’s Protection has been voted Best Pub in the Pride Of Manchester Awards for two years on a trot.

It’s only a short walk (but unfortunately up a lot of steps) to the cinema, but we found comfortable seats waiting for us and we settled down to watch the feature. The film was fabulous. Farrokh Bulsara (Freddie Mercury) was depicted as a talented showman and perfectionist but the film didn’t shy away from showing his arrogance and extravagant lifestyle.

We learnt a lot about Freddie but the biggest surprise was that one member of our little party came out of the closet as the owner of all the Queen albums on CD!