Ten members of the group travelled to Liverpool but as our museum booking was not until 1.30pm we had refreshments in the cafe at St George’s Hall – a Grade I listed building in the Neoclassical style. In January 2008 when Liverpool started its tenure as European Capital of Culture, the Beatles’ drummer Ringo Starr played on the roof of St George’s Hall.

This was followed by lunch in an alcove at the Lime Street branch of Wetherspoon’s, before making our way to the museum.

For more than 2,000 years, an underground army of life-size terracotta warriors guarded the tomb of China’s First Emperor, Qin Shi Huang, until a chance discovery in 1974 unlocked the secrets of a vanished empire. This was a once in a life time experience. 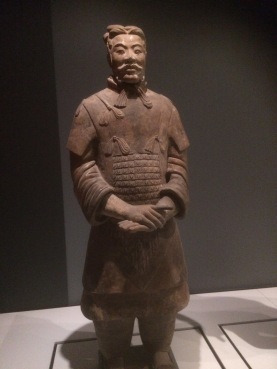 This landmark exhibition told the story of the Han Dynasty’s golden age through exquisite objects from royal burial sites, and will remain in our memories as a really special event.

I wonder which one is the oldest exhibit?

One thought on “Terracotta Warriors exhibition”