‘I refused to let them intimidate me’: the untold stories of LGBT+ seniors

At a new exhibition, Not Another Second, 12 LGBT+ seniors share stories of resilience, struggle and love. 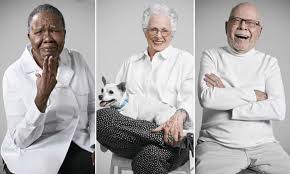 ‘I didn’t find there was much difference between loving a man and loving a woman. In general, love is love’ … portraits from Not Another Second. Photograph: Karsten Thormaehlen, nAscent Art New York and RXM

When Pearl Bennett, now 69, came out as a transgender woman at a family dinner when she was 50, she wasn’t warmly embraced.

Bennett’s mother leaned in and asked: “What is all this?”

“I saw that look in my mother’s eyes, she was a little drunk,” recalls Bennett.

“My mom stroked my breast, came in close and said: ‘I just want you to know that West Palm Beach is not big enough for ‘Pearl’ and the Bennetts,’” recalls Bennett.

“I felt ostracised by my family.”

This heartbreaking anecdote and many more are part of Not Another Second, an exhibition in New York City, which tells the stories of a dozen LGBT+ senior citizens who tell their own coming out stories. Each photographic portrait and video interview is marked with a number, like “16 years”, representing the time they lost to staying in the closet, based on societal expectations of the past.

The exhibition is on view at the Watermark Retirement Communities at Brooklyn Heights (a $330m Brooklyn senior home redeveloped from the former Leverich Towers Hotel, which has over 60 locations across the country) and is presented in partnership with SAGECare building certification and an agency, RXM Creative.

“To this day, this group of individuals continues to face challenges that need to be acknowledged,” said David Barnes, Watermark’s CEO and president. “It reminds us that we can’t take our rights for granted and must continue working toward a more accepting future for everyone.”

The photos, taken by the German photographer Karsten Thormaehlen, capture the seniors in joyful exuberance. They’re smiling, laughing, gazing off into the distance or staring straight into the camera lens, fearlessly.

Each video interview details how they fought the conventions of their time, stood up for their rights and paved the path for today’s generation of LGBT+ activists.

“These are honest and genuine shots of authentic people,” said Thormaehlen. “I truly hope this will encourage many people, younger and older, who still are suffering from hiding their personality, to create more tolerance, which leads to more fruitful discussions in society.”

The exhibition features photos on the walls alongside quotes from the elders. In one, Ray, 82, says: “If you came out to your family in our generation, usually it was disastrous. I stayed in the closet until I retired. I didn’t want to hurt my mom or the rest of the family.”

One 78-year-old woman named Ellie talks about being bisexual. “I didn’t find there was much difference between loving a man and loving a woman,” she said. “In general, love is love.”

Ronnie, 78, said: “When I first met my partner Earl, I looked at him and thought, ‘You are a knockout.’ I told God: ‘If you let me have him, I’ll never want anybody else.’ We stayed together for 44 years, until he passed away.”

One of the seniors who was profiled as part of the series is Paul Barby, the first openly gay man to run for Congress in 1996 in Oklahoma City. He wrote in a public letter at the time – when he was 61 – announcing his candidacy: “I am gay. Always have been. It has not held me back as I have worked for causes to help my fellow Americans.”

“A lot of people knew me, but they didn’t know I was gay,” he said from his home in Tucson, Arizona. “I thought ‘we have to re-energize.’ I’m glad I did it. It made life easier for many gay people in Oklahoma. Someone has to be first.”

Until 1973, the American Psychiatric Association considered homosexuality to be a mental disorder. For Nick, 73, coming out in the 1970s was not even an option. “It was still a crime,” he said. 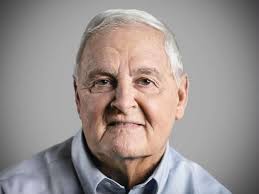 As Ronnie explains in the video, he came out when he was in his 50s. “And even when I came out, I still had this stigma that it was wrong,” he says. “Now, I see gay couples holding hands in public, that is something we could have never dreamed of.”

The Rev Goddess Magora Kennedy, 81, recalls her stern upbringing in New York. “Being black, a lesbian and in the church, it was difficult, but I stood my ground,” said Kennedy. “I refused to let people intimidate me.”

The video details the struggles around gay marriage, which was legalised in the US in 2015, and the fight for gay troops to serve in the military.

It resonates today, considering Joe Biden recently ended the ban on transgender troops in the military, allowing them to serve.

“I am so thrilled,” said Bennett. “It disgusted me when Trump banned trans people from the military. It interrupted their lives, their careers. Treating trans people like less than citizens. My heart just broke.”

It’s also about self-acceptance, as well as valuable wisdom for the younger generation. “My advice is to just know that you’re OK,” said Barby. “Just know we’re human beings and continue to be a good person. Don’t worry about pretending to be something you’re not.”

Not Another Second is on view at the Watermark Retirement Communities in New York City until 27 March. Follow this link to see more online.

In September 2020, the ukactive Research Institute, in partnership with EGYM, launched an Active Ageing consultation to explore how the physical activity sector is supporting people aged 55 and over to lead an active lifestyle.

Although the barriers and challenges experienced by older adults in being active are understood we are looking to understand how the fitness and leisure sector is supporting older adults to be active, and ultimately what older people want in physical activity offerings.

The first phase of this consultation involved an online case study submission for examples of solutions, programmes, initiatives and commissioning models that support individuals like yourselves to be active. These submissions came from across the fitness and leisure sector.

The second phase is to review these case studies. This is something ukactive would like your help with. This will involve reviewing 2-3 written case studies, providing scoring and feedback, and attending an online focus group to discuss general themes with others.