This year the World AIDS Day Vigil was held online, on 1 December, as we remembered people lost to HIV, showed our solidarity with people living with HIV around the world and committed ourselves to challenging HIV stigma and discrimination. 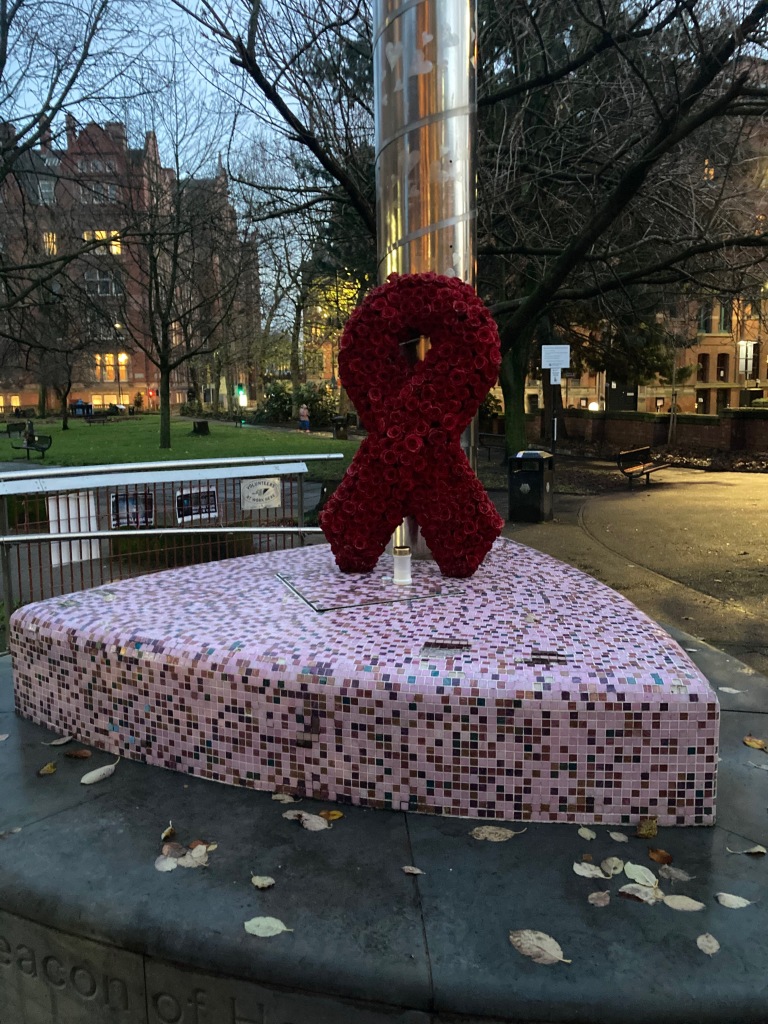 The Beacon of Hope in Sackville Park, which was conceived in 1997 as Manchester’s answer to the threat of HIV/AIDS, was decorated with a red ribbon.

The Beacon of Hope, designed by Warren Chapman and Jess Byrne-Daniels, consists of a series of elements combining together the existing ‘Tree of Life’ with the ‘Beacon of Hope’ light sculpture. They describe a metaphorical journey through life, providing the opportunity for remembrance, contemplation and celebration.

Manchester Village Stories is a research project at The University of Manchester. We are interested in learning about:

All are welcomed to participate, but we are particularly interested in hearing the stories and experiences of older LGBTQ+ people. This research will help to inform policy about urban development in Manchester.

You may wish to share a memory from decades ago or even yesterday. Perhaps you would like to simply provide a word or reflection that springs to mind as you think about a particular part of the Village or surrounding area that is significant to you. You can share as many stories as you like here.

Here are some ideas for inspiration: 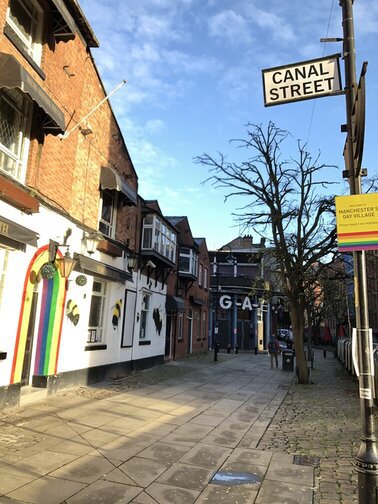 What will happen to my contribution?

After a short moderation process your contribution will be publicly available on the map (on the website) and you will receive an email letting you know. Your story will be anonymous for regulatory reasons. Please contact the research team if you have any questions or for further information.

The Village, at a glance:

Manchester’s LGBTQ+ Village has, for generations, functioned as a space where people can gather to express diverse sexual and gendered identities away from the glare of public opinion. As is common in the histories of LGBTQ+ city districts in the UK (and the US), the area was originally heavily industrialised and, as such, relatively sheltered from the hustle and bustle of city life. The pubs that existed in this area therefore became popular places for LGBTQ+ people to meet, but, as is common in these stories, these areas were also heavily impacted by criminal activity. This meant that LGBTQ+ people were exposed to risk not only from criminality but from a hostile police force as well. This was especially significant in a context where homosexuality was not legalised in the UK until 1967 and the Section 28 Regulations that were introduced in the 1980s.

The Village is now largely pedestrianised and is currently home to over forty LGBTQ+ bars, nightclubs, and local businesses, and is considered an LGBTQ+ hub and tourist destination. Recent redevelopment has already resulted in the removal of some landmarks that have been important in the history of the Village as an LGBTQ+ space. Future plans for the Village include extensive commercialisation and the construction of new buildings around the Rochdale Canal.

We want to evoke an image of what the Village was, what it is, and what it could become.

We want to open a conversation about the kinds of spaces, venues and services that have existed in the Village, exist now, or people would like in the future. We use an approach called ‘participatory mapping’ to help people think about the Village and its importance.

With your help, we can gather enough material to have input in policy decisions around urban development in Manchester, service provisions, history and heritage.

We are a team of four researchers based at The University of Manchester interested in understanding people’s experiences of Manchester’s Gay Village. We are Dr Amy Barron (Geography, SEED), Dr Jamie Garcia Iglesias, David Dobson and Jess Mancuso (Sociology, SOSS). You can contact us here.