During lockdown I’ve discovered that my three hobbies are going to restaurants, going to shops that sell non-essential items and touching my face!

Hope you are all keeping well. I did an interview with Manchester Pride. The link is below, but for convenience, I’ve printed the whole article:

Community Conversations: Out in the City

As people all over the world continue to adapt to social distancing and the ‘lockdowns’ that have been put in place to ensure the safety of all, businesses, organisations and community groups are finding new and innovative ways to reach their audiences. LGBTQ+ people are already known to be disproportionately affected by mental health issues and isolation, so continuing to reach out to the community is more vital than ever.

One such group finding their feet in the current situation is Out in the City, a project that aims to support members of the lesbian, gay, bisexual and transgender communities who are over 50 years of age in Greater Manchester. Before now, its members typically met every Wednesday from 1.00pm to 3.00pm at Church House in Deansgate.

In the first of our new series ‘Community Conversations’, we spoke to Tony Openshaw (second from right), organiser of Out in the City, about how the community group is adapting to the present circumstance in new ways.

“We normally meet up weekly and go out and do trips. Most recently we had a £500 grant from Manchester Pride, which we did a lot with it, such as trips to local places like the Centre for Chinese Contemporary Art, and tours of Bridgewater Hall and the Police Museum. We also organised trips further away to places like the National Coal Mining Museum and a minibus trip to LLandudno in Wales, but obviously we can’t do those kind of things right now. Out in the City is a big focus for many people in the group – it’s the main thing that they do each week – so it’s left a bit of a gap for many of us because people have lost that touch point.” 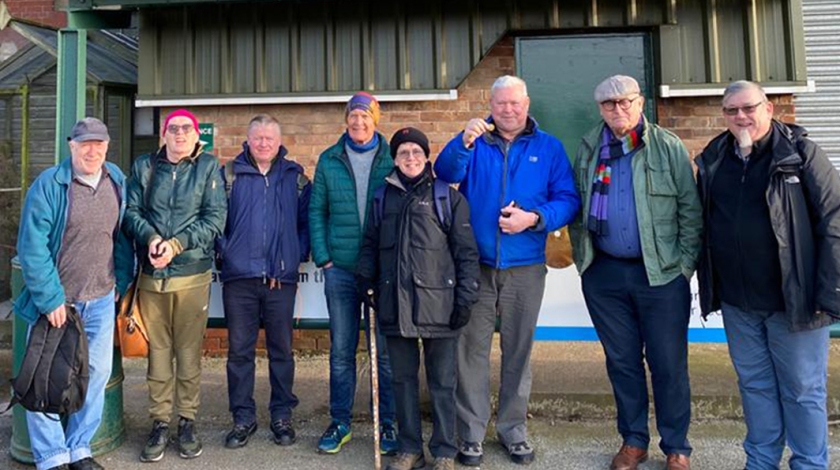 “For people who are living alone and have fewer connections, it’s quite a difficult time at the moment and Out in the City are trying to find ways around this. Some members of the group are being shielded by the Government, which means they are not able to leave their homes for twelve weeks. We’re keeping in touch with those members regularly, but we don’t have the same technological access that younger people generally have. We’re having to learn new ways to connect, like using Zoom and Whatsapp.

For most of us it’s telephone calls and text, so we’re having to learn how to connect. We’ve been linked with AgeUK for many years, in fact the organisation was originally run by them up until two years ago. They’ve offered support in the form of phone calls to keep in touch to tackle loneliness. We’ve also seen local neighbours getting in touch with some members, passing numbers round and offering support like getting shopping or sparing time to chat.”

“My advice to other organisations or community groups that are trying to continue their important work during this trying time is to take each day as it comes, and try not to think about how long it’s going to last. Link in with other groups; We’re working with AgeUK and Manchester Cares. Personally, I am reading – I just finished a book called Bass Culture which is about the history of reggae music. One of our members, who has learned how to use Zoom, did an online wine tasting with his neighbours and people in his local community.

Some people don’t speak to their family, and it can be quite a lonely time so it’s a good chance to be thankful for the big LGBTQ+ family we’ve made. Within the group, people have made more time to build friendships, taking more time to chat over the phone, to reach out and being generally very supportive of each other.

If you would like to get involved with Out in the City, use the contact page on the website if you’d like to support or join! We’re all looking forward to the end of this and hoping everyone keeps safe and well.”

One thought on “Community conversation”