I told everyone that the train from Piccadilly to Shrewsbury was 10.38am when in fact it was 10.31am, but disaster was averted as we all arrived in plenty of time. 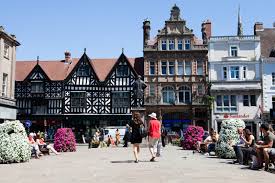 The journey took just over one hour to the historic town of Shrewsbury (Amwythig in Welsh). It’s a market town whose centre is largely unspoilt with over 660 listed buildings, including several examples of timber framing from the 15th and 16th centuries.

We made our way to The Bull for lunch, which was fine except that the chips were served ten minutes after the rest of the food and there was a mix up over one meal, which was entirely of our making!

I’m still waiting to be served! 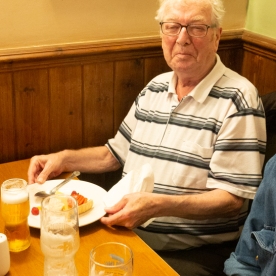 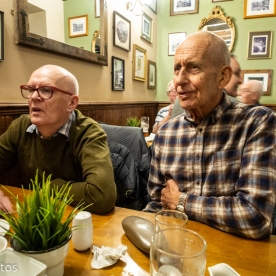 Not much gluten free on the menu

We didn’t have time to visit the Castle founded in 1074 or the Abbey dating back to 1083, but we did see the Museum and Art Gallery. There we learnt that the town is the birthplace of Charles Darwin, where he spent 27 years of his life.

The town centre still retains its medieval street pattern and many narrow passages. Some of the passages, especially those that pass through buildings from one street to the next, are called “shuts” (the word deriving from “to shoot through” from one street to another). Many specialist shops, traditional pubs and local restaurants can be found in the hidden corners, squares and lanes of Shrewsbury. Many of the street names have also remained unchanged for centuries and there are some more unusual and gay-friendly names, such as Grope Lane, Bear Steps and Pride Hill.

At the bottom of Grope Lane, we found a Costa and we were given complimentary gingerbread men with our refreshments. When we were enjoying a coffee, someone said to me: “You’ve got a big one!” It wasn’t true – I had a medium Americano.