The steam train from Bury Bolton Street station takes you to Rawtenstall via Burrs Country Park, Summerseat, Ramsbottom and Irwell Vale. The East Lancashire Railway is a 12.5 mile heritage railway line and has been run by volunteers since July 1987. Passenger services between Bury and Rawtenstall were withdrawn by British Rail on 3 June 1972.

On the way we met a friend – Jean Friend – from Oldham’s LGBT group, Out & About. She was enjoying a day out, and it was great to see her. 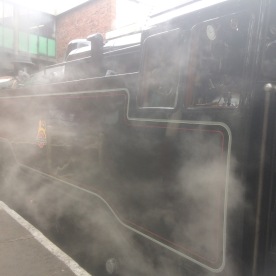 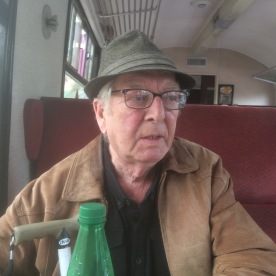 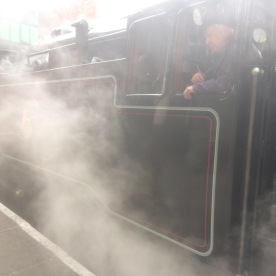 We previously made the journey during Bury Pride when the train was renamed “The Rainbow Train”, but we wanted to have a longer visit to the town of Rawtenstall.

On the way to the station we noticed the statue commemorating Victoria Wood: 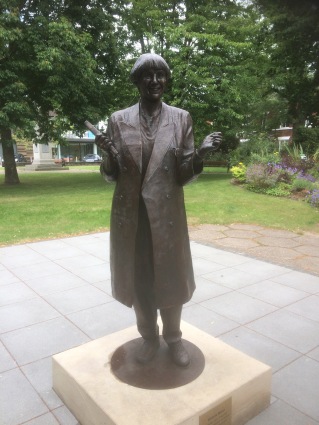 Victoria Wood, CBE was an English comedienne, actress, singer and songwriter, screenwriter, producer and director. Wood wrote and starred in dozens of sketches, plays, musicals, films and sitcoms over several decades, and her live comedy act was interspersed with her own compositions, which she performed on the piano. She was born in Prestwich in 1953, but sadly died in 2016.

“Thomas” also found time to have a ride on “Thomas the Tank Engine”. 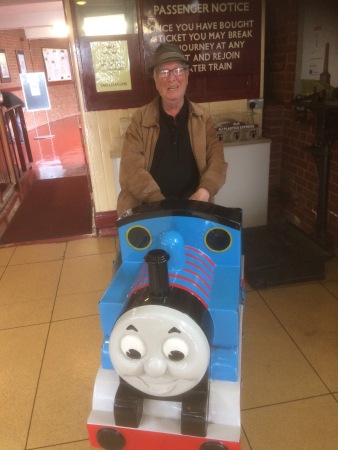 Once in Rawtenstall we looked for somewhere to eat and found a lovely cafe which served delicious food. The afters included home made fruit crumble and custard or sticky toffee pudding with custard!

It was a lovely day out – the sun shone and we discovered Mr Fitzpatrick’s – Britain’s Last Original Temperance Bar selling vintage drinks for modern tastes. The highlight, however, was discovering the building dated 1912 (now a carpet and rug emporium) which used to be a cinema which still featured a proscenium arch. Amazing!

For more photos of the Pride in Ageing launch click here

To find out more about our next outings click here

One thought on “Rawtenstall”