We were given free tickets for a mid-day concert at The Bridgewater Hall featuring Emily Nebel on violin and Alexey Pudinov on piano. 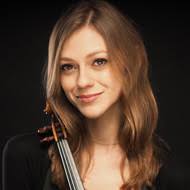 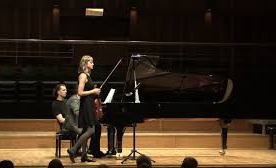 The performance was Elgar’s Violin Sonata in E minor Op.82 and Maurice Ravel’s Violin Sonata No. 2 in G major. The duo was formed in 2014 and has gained recognition for its unique sound and creative programming. They have received several awards and scholarships. We all enjoyed the concert tremendously.

We then went on to Wagamama, a gay-friendly restaurant in St Peter’s Square. The restaurant not only has a rainbow decoration on the outside, but has a special rainbow table inside. It was now mid-afternoon but was still quite busy.

The menu contains popular Japanese and Asian cuisine in many popular categories, such as ramen, teppanyaki and curry dishes. We sampled several dishes including a range of tasty deserts and green tea (which is “on the house”).

We had planned to visit the “Leonardo Da Vinci: A Life In Drawing” exhibition at Manchester City Art Gallery, as it is the 500th anniversary of his death. However, we decided to give it a miss due to the approaching rush hour traffic. The exhibition is free of charge and is on until 6 May 2019, so we still have time to view it.