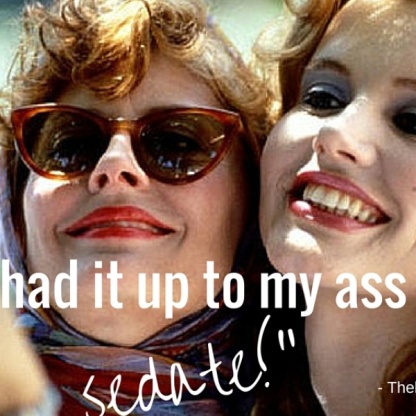 Well, what can I say, there were just two of us on this trip. So we decided to have a “Thelma & Louise” day out. Stuart commented: “You said you ‘n’ me was gonna get out of town and for once just really let our hair down”, and I replied “I don’t ever remember feeling this awake”. As soon as we arrived in Lancaster we decided to get matching tattoos.

But back to the beginning … the day started off with our train being delayed for 35 minutes. There is no longer a waiting room on platform 14 at Manchester Piccadilly and we were freezing with the biting cold wind.

We just missed our connecting train at Preston on platform 4, so made our way to platform 2 and just missed another train. Eventually we arrived at Lancaster and found a pub – the “Sir Richard Owen” but the food was terrible.

However, the day improved once we had made our way to Lancaster Castle (a former prison). The prison closed on 31st March 2011 but 303 male prisoners were detained as recently as 1991. When the prison opened you could be hung for stealing a horse or writing graffiti on Westminster Bridge.

In May of 1806 a large group of men were arrested following a raid on Isaac Hitchen’s house in Great Sankey, near Warrington. Hitchen’s home was what was then referred to as a “molly house” or meeting place for men. Some escaped, but many of them were charged with ‘sodomy’ or an ‘unnatural crime’, which in England carried the death penalty from the 1530s until 1861.

The trial took place at Lancaster Castle and attracted a lot of public interest and press attention across the country. In September 1806, five of the men, including Hitchen himself, were sentenced to death by hanging. It remains the largest known state execution of men for homosexual activity in British history. 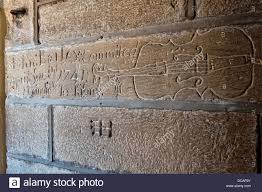 There is a lot of graffiti at Lancaster Castle but without doubt the most important is that created by John Bailey in 1741 on an internal wall in the John O’Gaunt gatehouse. Bailey’s graffiti draws on Georgian gay slang to describe how he had been “committed for kissing” and is an extremely rare example of someone openly stating, in the 18th century, that they had been arrested for homosexual practices.

Unfortunately, we know nothing of John Bailey, and the court records of 1741 have not survived. The graffiti states, however, that ‘Brindle’ was the man who had arrested him. The small ‘rs’ after his name probably points to Brindle being a member of ‘The Reformation Society’. During the 18th and early 19th centuries this group took it upon themselves to try and stamp out drinking, gambling, prostitution and homosexuality.

It is unknown what happened to John Bailey, but records show that he was not in the prison on 1st January 1742. The most probable reasons for this are that he was found ‘not guilty’, or that he was one of the many who died of disease whilst imprisoned at the castle.

We had a great day out, but please don’t ask us about the tattoos!

One thought on “Lancaster”