Chesterfield is a market town in Derbyshire which has traced its beginnings to the 1st century AD and the construction of a Roman fort, which became redundant and was abandoned once peace was achieved.

Later an Anglo-Saxon village grew up on the site. The name Chesterfield derives from the Anglo-Saxon words caester (a Roman fort) and feld (grazing land). 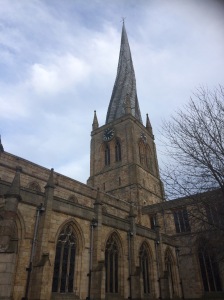 The town’s best known landmark is the Church of St Mary and All Saints, popularly known for its “crooked spire”, which was originally constructed in the 14th century. It is a mystery why the spire is crooked but it is probably the weight of the lead tiles.

We discovered a rainbow bench donated by the trade union “Unison” in the church gardens. 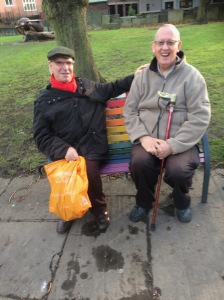 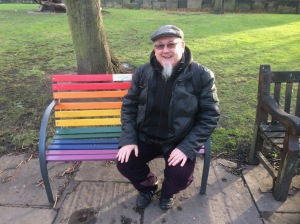 We also found an old fashioned outdoor market – we searched for treasures on the bric-a-brac stall (50p an item or 3 for £1) but without success. It was bitterly cold and we even had hailstones briefly so we sheltered in the indoor market hall where we had a warm drink and a snack.