The Pride parade Troopers workshop is run by an extremely nice guy called Brian, very arty and cleverer than a stick in a bucket of pigswill! He has managed to create costumes for fifty two people on a budget of under £3 per person. This picture shows one set of costumes, note the rainbow in six colours, as this is now the officially recognised rainbow of the gay community. Apparently the original eight colour rainbow was too costly for the purposes of printing. For my small part I ironed all the ‘P’ transfers on most of the shirts and most of baseball caps. I also did the transfers on the sweatshirts for the cheerleaders. 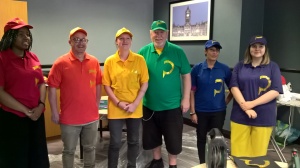