We had a great day out in Halifax starting with a coffee at the Square Chapel Arts Centre which is just opposite Halifax Railway Station. The Arts Centre is a beautiful Grade II listed red brick Georgian Chapel and is a wonderful conversion. It’s a friendly and relaxing place. 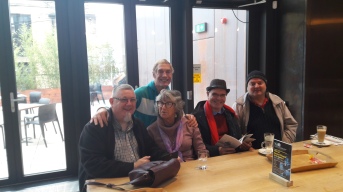 We then made our way to the Minster where we had lunch and listened to a very enjoyable organ recital. There were 12 short pieces including J S Bach and Cesar Franck.

This was followed by a private tour of the Minster lead by David, a local historian. He guided us around the Minster and gave us a very interesting and informative talk. He told us about Anne Lister who was baptised in the 900 year old font and whose grave stone was apparently vandalised because she was a lesbian.

Anne Lister was a well-off Yorkshire landowner, diarist, mountaineer and traveller. Throughout her life she kept diaries (written in code) which chronicled the details of her daily life, including her lesbian relationships, her financial concerns, her industrial activities and her work improving Shibden Hall. The Hall is currently closed to the public as there is filming of her life story. 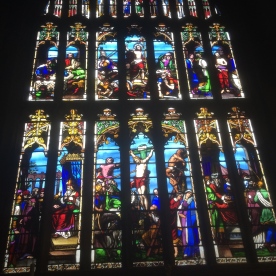 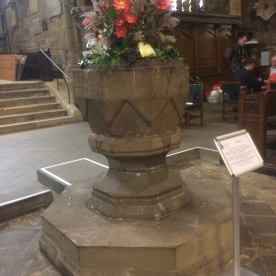 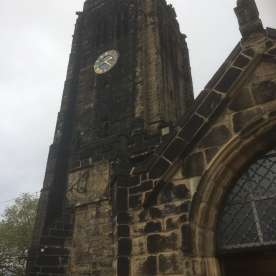 We had a look at some of the quirky shops in the Piece Hall before returning to the Square Chapel Arts Centre for another coffee and cake! 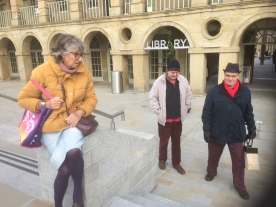 Halifax Railway Station was the location for the film Brief Encounter, a 1945 British romantic drama film directed by David Lean about British suburban life on the eve of World War 2. It centres on Laura, a married woman with children, whose conventional life becomes increasingly complicated because of a chance meeting at a railway station with a married stranger, Alec. They fall in love, bringing about unexpected consequences.